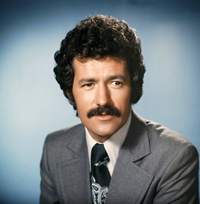 Some people get a new smartphone more frequently than they change their smoke detector batteries. Sprint customers can upgrade their phone every 12 – 22 months at a discounted price.  Being eligible for a Sprint upgrade, I could buy a brand new iPhone 5s for $199.99.  I don’t need a new phone, but I bought it anyway – to sell it.  Yes, I’m dabbling in a little mo’ arbitrage.  The iPhone 5s goes for about $500 on Craigslist and eBay.

Pulling the trigger, I jumped on Sprint.com and used my upgrade offer to buy it.  Although I could have picked it up at a Sprint store, I had them ship it to me for free.  When it arrived, I snapped a few pix and posted it on eBay for a “Buy It Now” price of $497.  5 hours and 22 minutes later, it was sold!  I slapped an eBay mailing label on the box it came in and sent it on to its new owner in Missouri.

Besides my affinity for a deal, there was a bigger reason that I did this. I have an awesome Sprint plan. “Upgrading” extends one’s Sprint plan for two years, even if you don’t use the new phone.

My SERO
Years ago, my friend Jason got me into Sprint’s great SERO plan.  They no longer offer that plan, but I have been grandfathered in.  I only pay $50 per month for unlimited text, data, roaming and mobile-to-mobile (which is almost everything these days).  You can see why I want to keep that around.  Family plans may get you a better rate per capita (that’s fancy talk for “per person”).

As I wrote about in “Save $360/year with a Sprint iPhone SERO plan”, you may be able to buy a SERO plan from someone else.  I see four of them for sale on eBay right now.

What if I actually need a new phone NOW?
If something happens to my current phone, I can get the same phone for next to nothing.  As I wrote about here, I already have free insurance up to $600 for damage or theft.  All I’d have to kick in is the $25 co-pay.  I can get a certified pre-owned Sprint phone cheap.  Otherwise, I can always pick one up on Amazon, eBay or Craigslist.

Back to my phone flipping 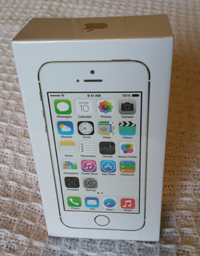 I was surprised how fast it sold.  If I were to do it all over, I’d see what I could get for it on Craigslist before posting on eBay.  I would have saved $84 in eBay and PayPal fees, shipping and insurance.

Why would someone by a Sprint phone from me when they will need to sign up for Sprint service to use it?  Unless you are eligible for an upgrade discount, Sprint sells the iPhone 5s for $649.99 + tax.  The guy who bought my phone saved about $200 buying from me.  All he needs to do is contact Sprint, open an account (if he doesn’t have one already), and activate his new phone. Everybody wins!  The buyer saved a couple hundred bucks, I made money and Sprint made money with a new customer.

Is it okay to do this?  Yes.  If not Sprint would not allow the phone to be activated by a different phone number than mine.  I have also sold my old Sprint phones for years.  If there was a problem, I would have heard from my buyers.

Here’s how my arbitrage broke down: 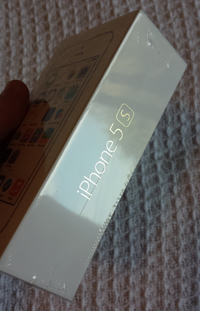 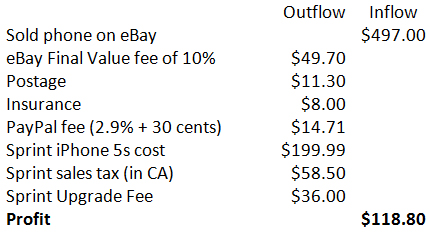 In case you are wondering why I paid so much tax, California charges sales tax based upon the retail price ($649.99) not the actual sales price ($199.99).  I will get charged the $36 “upgrade fee” which is same as activation fee, but since I already have a phone it is an upgrade fee.  It will show up on my next Sprint bill.

While buying the phone on Sprint.com, the estimated tax was much higher than what I was charged. I don’t know why.  Here’s the screenshot: 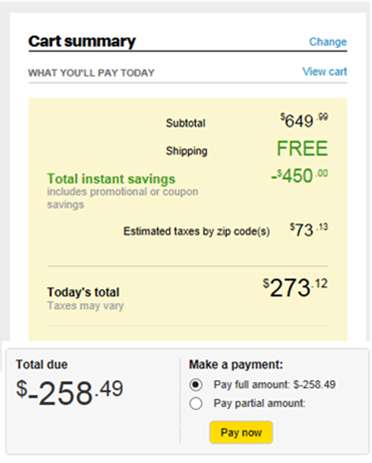 Weird Trick Got Me 3% Cashback Paying My Taxes

I hear putting “Weird Trick” in the subject of a post is a great way to get someone to read.  I can only imagine how “Barely Legal Weird Trick” would

Is This a Smart Way To Pay Uncle Sam?

Tax Day is less than six weeks away.  Some will get refunded a portion of the free loan that they gave the government.  Others will be scrambling at the 11th