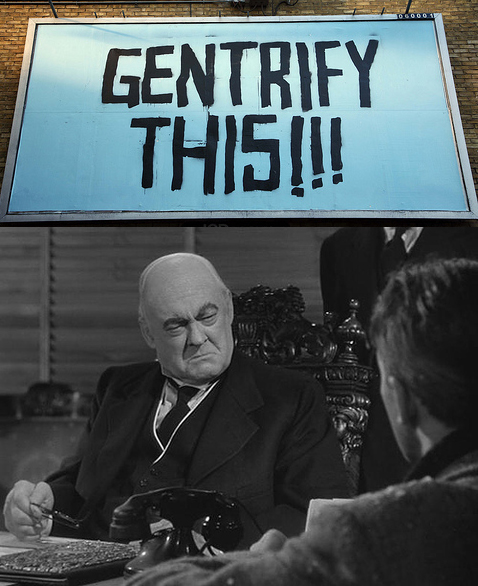 A few years ago, I bought a condo that was in foreclosure with the intention to flip it for big cash and prizes.  I had mixed feelings about the process.  Was I helping gentrify a little piece of the world, or was I Mr. Potter booting the rabble from Bailey Park?

I know this sounds crazy, but it was a “Win” for everyone involved – especially the guy who lost his home.

Like Carolina in Flipping Miami, my neighbor was in the flipping business.  Now I was too, sorta.  I hired my neighbor to hold my hand through the process.  Why pretend like I knew what I was doing?

Thankfully, I was not the one kicking anyone out of their home for non-payment.  The bank foreclosed upon the man who bought it 20 years prior, because he had stopped making mortgage payments for several months.  As you can glean from my post Is Homeownership a Good Deal? – renting is a better option for some because of the flexibility to move and inability to get foreclosed upon.

The process was pretty simple after my bid won, except for one teeny-tiny thing.  I had to come up with cash for the purchase.  Back in 2005, banks were very loose with lending money.  I used some of my savings and some of my home equity line of credit (HELOC).

Among other things, my neighbor suggested replacing the stove and dishwasher for a total of $250 so the listing could say “New Appliances”.  She also suggested replacing the old vinyl floors with tile.  Reason being, if people are looking at my condo they will be looking at other ones as well.  No need to lose a sale over a couple hundred bucks in flooring.  New paint, new carpet, new wall switch and outlet plates, a little Spic ‘n Span and the place looked great!

My mixed feelings started to separate when the former owner contested the foreclosure and I had to hire an attorney to evict him, make an appearance in court, and pay $600 in related fees.

Thankfully, his attorney talked sense into him.  When I arrived at the courthouse, his lawyer came over and told me all was good, he was no longer contesting the eviction, and that the former owner thanked me for the money he was going to get.

That’s the “Win” I mentioned.  The foreclosure on his condo was more like a forced sale.  After the bank got the money owed them, the foreclosed-upon former owner got the rest.  He walked away with $250,000 tax-free and clear.  Remember, a single person can keep $250,000 of the profit from a home sale, without paying any taxes.  A married couple can keep $500,000.

He made hundreds of thousands, I made tens of thousands, and the city quadrupled the property taxes because of the increased cost basis.  Of course realtors and repair people all made money and paid taxes on that income.  A new chapter began at that newly rehabbed home.

I am not pretending that all foreclosures have a happy ending, but this one certainly had a large silver lining.  Have you flipped a property?  What were your experiences?

Too Good To Be True? Nope. See for Yourself!

I don't suggest things unless I think they are a good deal, and more often than not, are things I have done myself. Last week, I got the Chase Ink Bold card and made a

Subscribe in Tunes Today on The PodCASHt, I talk with the husband and wife stars of the new A&E show Flipping Miami. Dubbed “Sophia Vergara with a tool belt”, Carolina and Chris talk about flipping houses