The short answer: If you have DirecTV, call their “Customer Retention” or “Customer Loyalty” department and ask if there are any discounts on your account. While they are going through those with you, ask them if they can toss in NFL Sunday Ticket. If you don’t have DirecTV, they’ll give it to you for signing up with them.

Here are a few ways you can get it free.

A) You could steal it. But, it’s probably best to not spend the 7th day resting while simultaneously shattering one of The Commandments.

B) You can get it free if you are a new customer to DirecTV, and sign a two-year contract with the “Choice” package or higher.

C) If you are already a DirecTV subscriber and eschew thievery, here’s the first step I took to getting it free. I called DirecTV. I told the phone maze robot that I wanted to “cancel service”. This got me a human in “Customer Retention”. In 2017, DirecTV reps also referred to this department as “Customer Loyalty”. If you aren’t going to utter the words “Cancel Service” – just hang up the phone. You are wasting your time.

Here’s how I got it free all those years. Feel free to use anything you like:

I got it free when I finally upgraded from standard def to HDTV. No word as to when I will upgrade from candelabras to lamps.

I politely asked MJ in Customer Retention if there was any way I could get NFL Sunday Ticket for free. MJ looked at my account, which is already maxed out with discounts, and said she could give me NFL Sunday Ticket for free if I agreed to keep DirecTV for a year. This did not extend my contract a year. I just can’t cancel DirecTV for 12 months or I’d have to pay a cancellation fee of $10/month. Your results may vary, but it’s worth a call. Done and done. I saved $224.95.

I called back a few days later. I simply asked Tiffany in Customer Retention, “Is there any way I can get NFL Sunday Ticket for free?” She could not offer me anything off the regular package, but said she could get me NFL Sunday Ticket MAX for half-price or $164.97. This is the package that allows one to play it on multiple devices, among other things.

I thanked her but said that was more than I wanted to spend. She asked me if I had seen other offers from competitors. I said I knew they existed, but had not pursued them.

She said that they valued my long-time loyalty, so she was able to drop another $100 off the price. Now we are at $64.97. That’s only $4/game. I would have accepted that, but figured I had one more move. I thanked her, but asked if there was any way I could work out some kind of discount for the less expensive regular package, so I would have less out of pocket.

Tiffany said because of my long time loyalty and perfect payment record, she could give me a one time courtesy credit of $64.97. TOUCHDOWN! What surprised me the most is that I didn’t have to try very hard.  Give it a shot!

After three years of getting it free, I’m running into some difficulty in Year Four. I called three days in a row. Each time, their offer got better.

1st call: Best they could do was give me MAX for half off. That came to $176.97.
2nd call: Nicole offered me MAX for half off ($176.97) + free Showtime for 4 months.  They also took $3 off my Regional Sports package for 12 months.  I accepted the $3/month discount, but declined MAX and Showtime.
3rd call: Vicky offered me MAX for less than half off ($167.96). I said that I liked the football but wasn’t sure it was worth it to watch my Bengals. Then she said she could offer me a one-time statement credit of $85. That brought it down to a total of $83.98.  That’s about $5/game which is reasonable, but I politely declined. She said she will keep that offer in my file and I can let them know later. I figure I will call again next week. Stay tuned!
(UPDATED 8/18/15 — TOUCHDOWN + 2 Point Conversion!)
4th call: It’s been two weeks since my last call. This time my approach was slightly different. I did not mention NFL Sunday Ticket at the beginning (in case they were on to me; how could they NOT be?). I simply asked if there were any promotions available. Christina thanked me for calling. She mentioned that someone had spoken to me two weeks ago. Then she asked how much I wanted to spend every month. That would have veered off into the wrong discussion. I redirected by saying that when I spoke to them a couple weeks ago, I was told to call back to ask if any promotions were available on my account.

Just like how you don’t want to leave a fishing spot when they are jumping on your hook, I asked if there were any HBO or Showtime promotions. I had just cancelled those a few weeks ago because the shows I watched ended, as did my discounts. I also thought it might be easier to get something for free if I didn’t have it on my account. I guess I was right.  Christina said she could give me HBO, Showtime and Cinemax for 3 months free. She also said I could get a free upgrade to their wireless genie system but I held off.

Get in there. The fish are jumpin’! See my account update below. No foolin’ ’round.

Takeaway: Don’t be afraid to ask for the Customer Retention supervisor.  See screenshot of my deal below.

I decided to wait until my final discount drops off my DirecTV bill before calling. It has been my experience that more discounts are available when you don’t already have them. I will call DirecTV’s Customer Retention department on September 12th when my final $50 off/month goes away. Sunday, September 10th is a freebie to all, so I don’t “need” it until the 17th. I’ll report back here on my findings!

Well, well, well. A buddy of mine was fed up with the players’ National Anthem protests. He called DirecTV and told them he was not going to renew Sunday Ticket. He also wanted discounts off his regular programming. They gave him the stiff-arm. Completely fed up, he told them to cancel his service effective a few days later. He was switching to cable. Next day, the phone calls and emails from DirecTV came flooding in. He got crazy discounts down to $40/month and NFL Sunday Ticket Max!

Back to my situation: I called asking for any discounts and NFL. During that call I was told that I was still under contract for another year. WHAT? WHY?! An equipment change came with a two year commitment. I reminded them that the reason for the equipment change is that their equipment stopped working.

So… I decided to take a page out of my buddy’s playbook. I gave them a date ten days in the future to cancel my service. Certainly they will do everything in their power to keep this 17 year loyal customer! They sent me a box in which i was instructed to ship back my equipment. Ha!!

There was a note in the Packing List envelope on the outside telling me that if I change my mind and stay, they’ll sign me up for a new two year run and give me a $200 gift card. I was too far irked. I shut down DirecTV and watched with a buddy. I’m sure there was more than a few Hip, Hip, Hooray!s for the rep that got me to leave. They must’ve loved getting my calls.

The takeaway: Even if you go nuclear, you might get calls begging you to stay. Or you might get something like the offer they sent me, on the cardboard box that they ship to you so you can return the equipment: 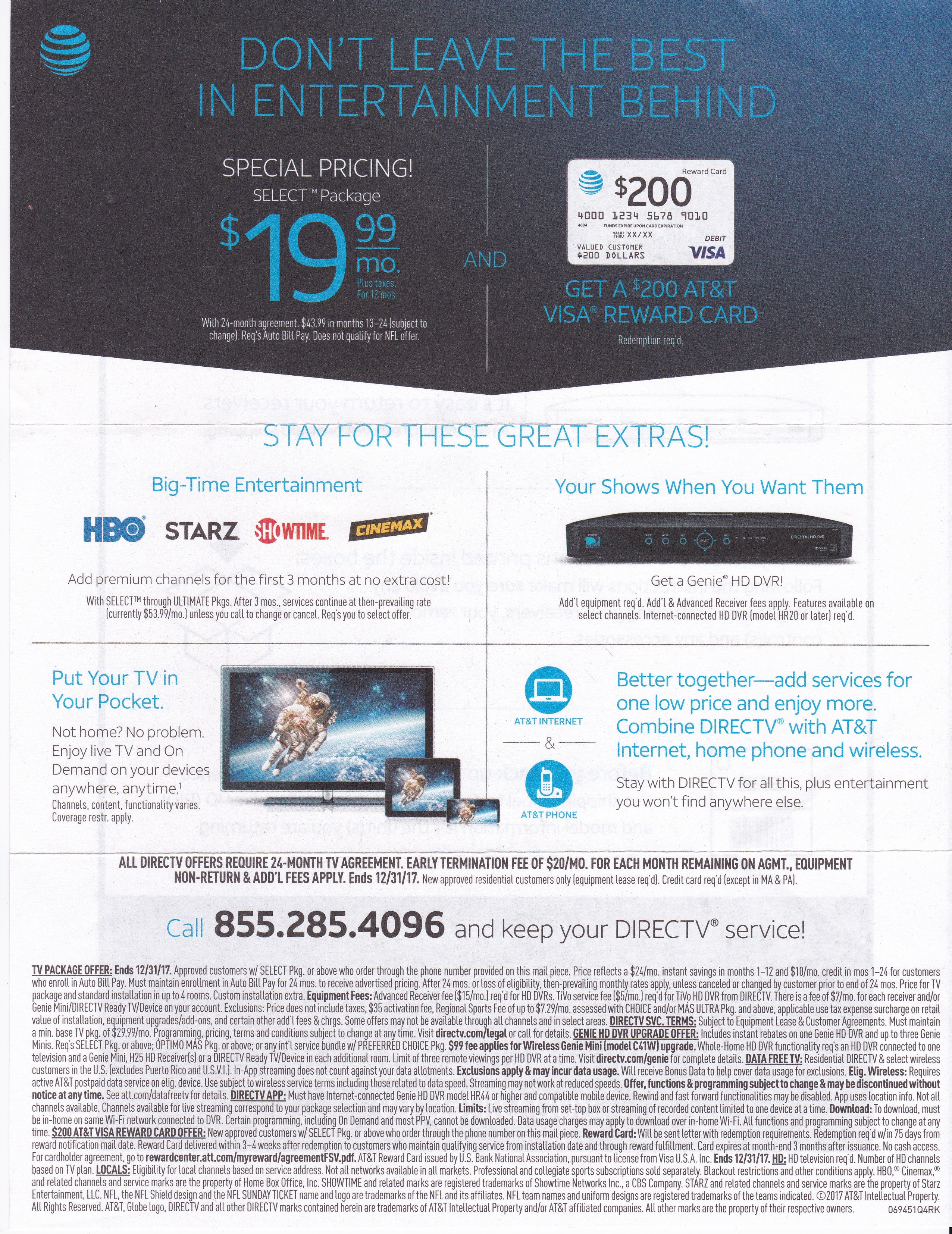 If you had NFL Sunday Ticket last year, you will automatically get billed for it. You have until the season starts to cancel that. I cancelled the auto-billing of NFL Sunday Ticket on my account before making the calls to Customer Retention. 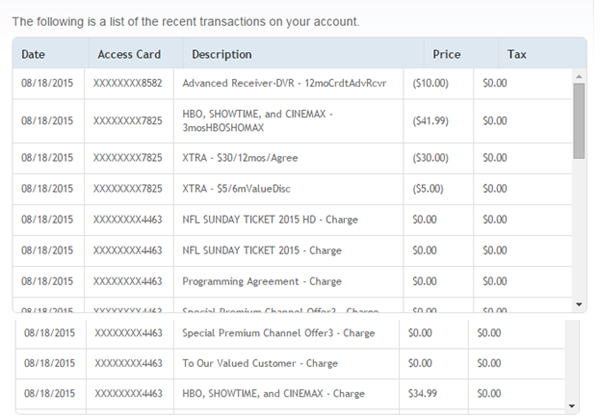 Reason to Ditch your Debit card

A few days ago, my 18-year-old nephew texted me, “Do you know what this is? I didn’t make these purchases.” To ape M*A*S*H’s Radar O’Reilly, he got a debit card

How To Increase A Child’s Credit Score

When my nephew turned 18 this year, he had a credit score of 805. That’s pretty sweet! He has never borrowed any money. He has no student loans or car payments.