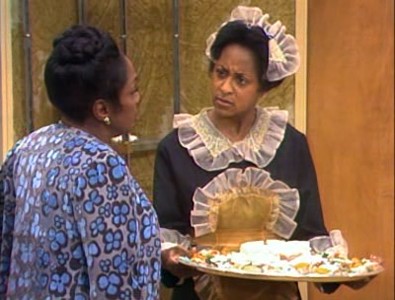 Lots of folks have a second job to help make ends meet.  Have you considered starring on a hit sitcom as your side gig?

Marla Gibbs played Florence on The Jeffersons for all 11 seasons.  Three years into the show’s run, she was still a full time reservations agent at United Airlines.

The cynic in me wondered if this was true or just the work of a publicist.  I reached out to my friend Jay Moriarty, who just so happens to have been a writer/producer on the show.

Jay said, “Marla was a recurring character the first two seasons.  We didn’t move her into the home as a full-time maid until the third season, when Norman (Lear) convinced her to give up her gig at United.”

I admire Marla’s pragmatic approach to her finances and her awareness of the fickle business of show.

Jay went on to say, “Seven years into the show we created a spinoff for Marla called Checking In.  She did not want to leave The Jeffersons.  She insisted that it be put in her contract that if Checking In is cancelled, she can go back to The Jeffersons.  Smart move.  The new series was cancelled (with a 33 share) after four episodes.  (Today, a 33 share would make you the #1 show in all of TV.)”

You can see Marla talk about this at 19:45 in the episode of UNSUNG HOLLYWOOD.

If you are a California resident, you can get a Southwest Companion Pass by getting a new card and making only one purchase.  This is huge. That’s right. Get a card;