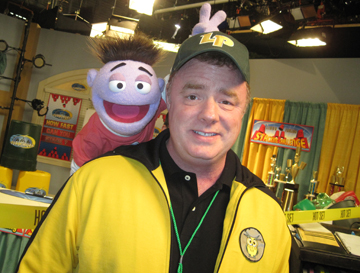 ”Crash & Bernstein” is a TV show on Disney XD, in which I play Hank Urkhart: Coach – Science teacher.  How’s that for a hyphenate?  My purview is jock straps and Bunsen burners.  Never the twain shall meet.

This conversation was a perfect storm for me: Comedy, Performing and Money.  More specifically, Passive Income, which is income received on a regular basis with little or no effort required to maintain it.  These guys worked hard coming up with Coach Urkhart, but they didn’t have to do anything else to keep getting paid for it.  Even if they never worked another minute on the show, they’d still get a check in the mail every time my character came back.  Nice! 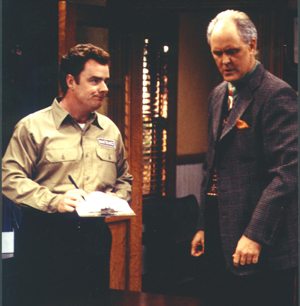 Passive income was in the air that day.  When I got home from the set, I was greeted with some mailbox money, a residual check from 3rd Rock From The Sun (the very first sitcom I ever did).  That’s also where I had my first on-screen kiss.  Unfortunately, that was with John Lithgow.

When it comes to money, little amounts can become big amounts.  Over the years, the total passive income I have received from that episode of 3rd Rock is six times what I was paid for those two days of work in 1997.

I hear ya.  “Well that’s nice, ChipsMoneyTips, but I’m not a TV writer or actor.  How can I get passive income?”

The first step is to squirrel away a little somethin’ somethin’ in a business.  You don’t have to open your own frozen banana stand.  Just put some money in an existing business by purchasing stock in that company.

For example, you can invest in Starbucks instead of spending all your money there.  When I bought a fund that closely resembled the S&P 500 Index, with just a click of a mouse I became part owner of hundreds of companies.  Buying a stock or mutual fund is a form of gambling.  You are making an educated bet that the company will do well and make you money.  Passing up some cups of coffee to own some of the coffee company, or whatever you buy a piece of, might be skin that you can afford to have in the game.

Also consider owning stocks that pay dividends.  Some stocks pay you money for every share you own, regardless of the stock’s performance.  The little bits add up.  This week, I will get my quarterly dividends from Procter & Gamble.  For every share I own, I will get 60 cents.  If you like a company, I suggest automatically reinvesting the dividends in new shares to build up your portfolio.

As I wrote about in “I Got Me Some Mitt Money”, anyone can buy stocks and pay the lower capital gains tax on those qualified dividends or the sale of the stock after holding it a year – just like Barack Obama, Mitt Romney and I do.  The stock market is not just for the 1%ers.  The IRS will back me up on that. 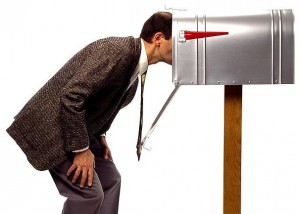 Owning rental property is another form of passive income.  Although it can be time consuming, that income is considered passive by the IRS, so I include it here.  Check out my landlord experiences in “Eddie’s been looking in my mailbox…”.

I realize that buying a property may seem like an impossibility when you don’t have a lot of cash.  Do what I did.  Live in a cheap place with a roommate or two to cut expenses.  Start saving.

Little by little, you will build enough to have a down payment to buy a property.  If you move into that property, keep the roommate(s) to save more money.  Eventually, you will have enough money to buy another place.

The goal with rental property is to make some passive income while your tenants buy the property for you.  Once it is paid off, the rent you collect will go a long way toward paying for your living expenses.  That’s not a bad trade-off for making sacrifices in your youth.

Over 17% Off Starbucks Gift Cards

Are you a coffee-achiever like Mrs. Olsen? If those nouns sound like gibberish to you, congratulations on being under 40. I’m talking about the bean, man! This week only - CardCash

Do you have a rubber band around a stack of gift cards that you’d like to turn into cash?  As I wrote about in In “Mr. Bojangles & The Plastic