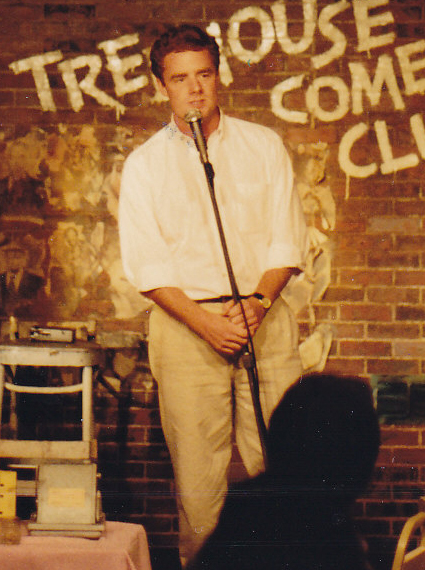 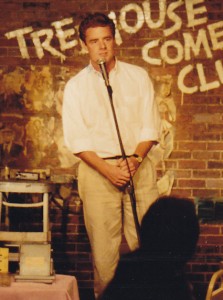 For better or worse, today marks a quarter century since I left my 9 to 5 cubicle.  “Chip Chinery – Director of Communications at The Bank Mart”.  That was my handle.  I graduated with a degree in Psychology, worked as a TV cameraman, then as a banker.  That’s pretty much the natural progression.  But all along, what I really wanted to do was be a full-time, professional stand-up comic.

As those of you who have taken a leap of faith can attest, it isn’t easy.  There’s a saying, “Do what you love and the money will follow.”  Well, that makes a nice bumper sticker, but there are some bankrupt and homeless people who may disagree.

Fear of failure keeps most of us from taking a shot at what we really want to do.  This is especially true if you are used to eating every day and sleeping inside.  It certainly postponed my launch.  I thought, “What if it doesn’t work out?  THEN what will I do?”  For some people, it is easier to take the route of nothing ventured – nothing lost.  If you never try, you never fail.  After all, no one wants to be washed up at 23.

Comic Lives
I’d been working at The Bank Mart in Bridgeport, Connecticut for six months when I had an epiphany.  I shouted, “Today doesn’t suck.  EVERYDAY sucks!”  I loved the people, but hated the job.  So, I walked into my in-law apartment on the Housatonic River and pulled out a book I just finished about stand-up comedy called Comic Lives.  Looking for an answer, I closed my eyes, flipped through it and then stopped on a random page.  I asked for a sign to tell me what I should do.  Where my finger landed it said, “It was at this time that they knew they needed to be in front of a nameless, faceless crowd telling jokes.”  Maybe God didn’t hear me.  Any sign at all, please.  Any sign… 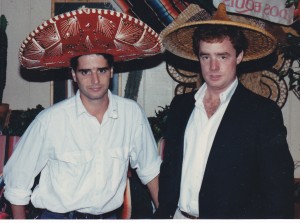 Being a comedian was not just a whim.  I had been doing stand-up at open mic nights sporadically since high school.  A couple months before going to work at The Bank Mart, I started doing open mic nights almost every week at The Funny Bone in Cincinnati.  This continued at the Treehouse Comedy Club in Connecticut.  Paying gigs in nearby towns soon followed like Que Pasa Comedy Night with my friend Tom Hertz.

Lunch With The Boss
The same week I had my epiphany, The Bank Mart CEO who created my position for me, asked me to lunch.  Mr. Freeman wanted to know if there were any other areas of the bank that interested me.  I could continue to do what I was doing, but if I was interested in other areas, he could make that happen.  I knew I was very fortunate to have him as my mentor.

I told him that I had been doing stand-up and wanted to try to pursue that full time.

Mr. Freeman told me how he had been offered a contract to play baseball in the Cleveland Indians organization, right out of high school.  He decided to go to college instead, and then moonlighted in semi-pro leagues until he was 35.  Reflecting back, it was his opinion that he could have made it to the big leagues if he had signed when he was 18.  As you can guess, he said I should go for it.

Mom Gives Thumbs Up
I knew that I wanted to do stand-up, but did not want to tell anyone until it was happening.  When I told my folks that I gave the bank my one month notice, my mom asked what I was going to do.  I said, “I don’t know.”  My mom surprised me saying, “That’s exciting!”  I moved back into my childhood bedroom in Cincinnati.  Why Cincy?  It was centrally located to comedy club work.  It is within 700 miles of 2/3rds of the country’s population.  Since I would be gone for weeks at a time, I could save on rent.

The Audition
Some of the comics from my open mic days were touring the comedy club circuit.  They gave me names and numbers of club bookers.  I drove to Louisville to audition for one of the biggest bookers in the country: Tom Sobel’s Comedy Caravan.  He and one of his agents, Julie Powers, saw my set.  They liked me.  A couple days later, they started filling my calendar.  Three weeks after leaving The Bank Mart, I embarked on a string of one-nighters and week long clubs.

3,000+ shows
The leap worked out for me.  I toured an average of 45 weeks a year for 10 years.  I’ve been all over this country having played on 477 stages, in 297 cities, over 42 states, D.C., and The Bahamas – including all the places named in The Steve Miller Band’s “Rock ‘n Me” and Sade’s “Smooth Operator” songs.  I did stand-up on a half dozen national TV shows.  I even opened for Donny Osmond & Lou Rawls.

If there is something you wanna do, I say get in the batter’s box and take your swings.  You might actually be good at it.  Make a plan of attack and go for it.

As Teddy Roosevelt said, “It is not the critic who counts; not the man who points out how the strong man stumbles, or where the doer of deeds could have done them better. The credit belongs to the man who is actually in the arena, whose face is marred by dust and sweat and blood, who strives valiantly; who errs and comes short again and again; because there is not effort without error and shortcomings; but who does actually strive to do the deed; who knows the great enthusiasm, the great devotion, who spends himself in a worthy cause, who at the best knows in the end the triumph of high achievement and who at the worst, if he fails, at least he fails while daring greatly. So that his place shall never be with those cold and timid souls who know neither victory nor defeat.”

Is there something you really want to do?  Have you ever taken a leap of faith?

Here’s a story that I got on the local news during my tenure at The Bank Mart.  I’m the hairdo on the left pretending to be an applicant.

During an interview for an ESPN The Magazine article, The Champ showed writer Tim Keown his ATM slip.  Floyd has $123 million in there. I was shocked.  WOW, a boxer who

I usually run a little late to the technology party.  It’s a combination of not feeling the need for the newest gadget and my innate frugality.  Although I was born in