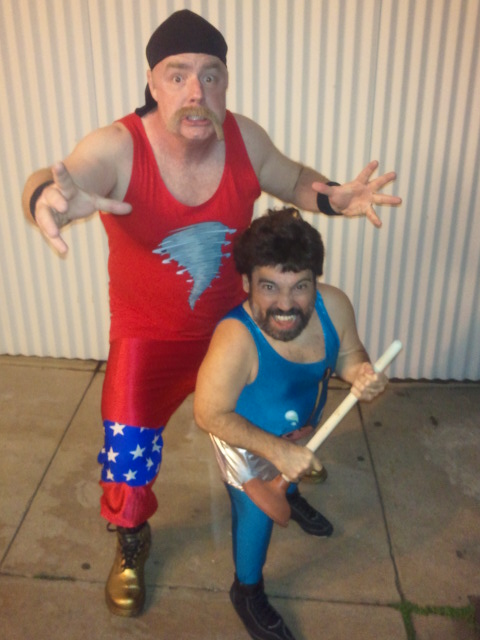 A month ago, my new episode of Rules of Engagement aired on CBS.  No doubt my portrayal of “Randy the Paramedic” has set the bar for the way paramedics and Randys will be played in the future.

I decided that would be the day I’d start keeping track of what I actually watched on my DirecTV.  I did it for a month, book-ending it yesterday with my first appearance on Crash & Bernstein, which aired on DisneyXD.  I play “Coach Urkhart” on the show.  This post’s photo is from a flashback to when Coach Urkhardt was a professional wrestler.

My results confirmed my hunch: I am largely a watcher of free TV.  3 out of 4 hours were spent watching ABC, NBC, CBS, FOX and PBS.

Other than DisneyXD, I watched some ESPN for March Madness highlights.  Channel surfing stopped me once at VH1, AMC and A&E for a couple Storage Wars.  My TiVo also has unwatched stuff waiting for me from IFC and Comedy Central.  I get HBO & Showtime, but only watch one show on each.

If you are broke, living paycheck-to-paycheck, or can’t seem to save any money – you might want to investigate these other options:

1. I get $37 in monthly discounts off my DirecTV bill.  You should make the phone call to get your monthly bill lowered.  Ask for Customer Retention.  ONLY talk to them.  Mark your calendar for when you need to call for the discount again in 3-6 months.  I noticed they just tacked on a “Regional Sports Fee for $2/month”.  They removed it for 24 months.  That ten minute call saved me $50.

2. Local HDTV is free.  Cut the cable.  Ditch the dish.  Hook up an HD antenna.  Pretend it’s 1981 and reacquaint yourself with “appointment television”.

3. Watch shows online at the network websites.  You usually have to wait a day to see the new episode.  Use an HDMI cable to watch it on your TV.

After I ride out my DirecTV contract, maybe I’ll become one of those guys with a Home Theatre PC which acts as a DVR and receiver.  Even HBO is considering offering its programming via broadband internet providers.  Could the others be far behind?  The times are a changin’.

Have you cut the cable, or ditched the dish??

Is a "Bereavement Fare" Fair?

Ben Franklin said, “Nothing can be said to be certain, except death and taxes.”  April 15th is only 20 days away, so the latter is top of mind.  Unfortunately, the

$2 in Free MP3s with The Amazon Local App

My Jewish friends are having a Seder this evening.  If Elijah shows up, wouldn’t it be cool to greet him with Bryan Adams’ “Waiting For You”, followed by Weird Al