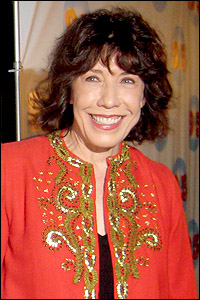 “Good fences make good neighbors” should be on coins in Los Angeles.  Out here, people trust in them more than God.  Virtually every home has a six foot high walled-in back yard for privacy and zombie attacks.

Despite earthquakes, a lot of these walls have been up for decades – erected by people long gone.  When the wall sits on the property line, neighbors tend to treat them like common property.

A few years ago, my backdoor neighbor Mike was preparing his house for sale.  There was a crack in our wall.  He asked me to pitch in to have it fixed.  Done and done.

Suddenly the neighborhood was all a buzz because Lily Tomlin bought that home behind mine.

I loved her on Laugh-In.  I wondered where she’d put Edith Ann’s huge rocking chair.  When she called to borrow a cup of sugar, would she say, “One ringy-dingy, two ringy-dingy…”?  At her housewarming party, would Arte Johnson stick his face over our wall and peak through the vegetation with “Verrrrry interestink.”  If this were 1969, we’d all be laughing heartily.

Turns out Lily bought it for her mom. Her mom didn’t like living there, so now she rents it to Gary. Just plain Gary. He has no characters at all, except “Guy Who Does Laundry On His Back Porch at 10pm”. It’s not very funny, except when he runs out of detergent.

So, what’s the money tip?  I recently refinanced my house, and thereby I suppose, my portion the wall that surrounds it.  In the next few weeks, I will write about my experiences purchasing a home, refi-ing, being a landlord, and flipping a condo!

Here’s a great tip.  Need to fix something?  (Offer expired).  Click on Chip’s Favorite Credit Card Offers for up-to-date deals, terms, and conditions on this card and more.  Email me if you have any questions about which card might be right for your situation.  Gary could use that cash to buy some suds!

If you’ve had you peepers on a little something in the storefront window, this may be the time to pull the trigger.  16 states are waiving sales tax in the

Update: Slate, as in "Clean"

Wipe your credit card interest slate clean. Pay 0% on Purchases and 0% on Balance Transfers for 15 months + No Transfer Fee!! Oh, and No Annual Fee. Click on Chip’s