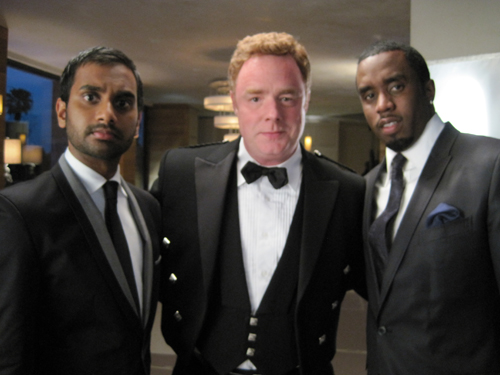 If you are a Screen Actors Guild member, listen to Aziz, Diddy, and me.  Well, me.  Here is the spot we did for Ciroc Vodka.

Did you know that it’s possible to move SAG earnings to qualify for health insurance coverage?   ‘Tis true!

First of all, you must know your Base Earnings Period & Eligibility Period.  My Base Earnings Period is October 1st – September 30th.  The Eligibility Period for health insurance coverage starts three months later.  Therefore, my health insurance coverage is January 1st – December 31st.  All periods begin and end on calendar quarters.

For this explanation, I will use my periods and paystub for a hypothetical situation from the recent past.  Let’s say I woke up the morning of September 30, 2011, the last day of my Base Earnings Period and realized I was $2,000 shy of earning enough to be eligible for health insurance coverage.  I also knew that there were no residual checks getting cut that day or coming in.  So, my health insurance coverage would go away on January 1, 2012.

This is bad news.  I felt like I was doing well, but the numbers felt differently.  I booked several jobs in the first few months of 2010, including one with Aziz & Do Wah Diddy.  I easily qualified for health insurance coverage in my October 1, 2009 – September 30, 2010 Base Earnings Period.  In fact, in that Base Earnings Period, I made thousands more than I needed to be eligible for health insurance coverage.

Here’s the good news:  SAG Pension & Health will allow you to move earnings from one Base Earnings Period to another, if the payment’s usage cycle spans both periods.  This is easy to determine with Internet, Cable and Industrial Use.  It is slightly more complicated to figure out with Class A airings, because those usage dates are specific.

So, I dug out my old paystubs and found a $2,072.70 Internet Use payment that spanned two Base Earnings Periods.  See screen capture below.  Those earnings were recorded when the check was cut in June 2010 and were tallied as part of my Base Earnings Period that ended September 30, 2010.

I did not need that $2,072 to be eligible for health insurance coverage.  Remember, I made thousands more than I needed to be eligible.  So I asked SAG Pension & Health to move that $2,072.70 to October 2010.  When they did, those funds counted toward the Base Earnings Period ending September 30, 2011 and I got health insurance coverage for another year!

This is important: When calculating what payment(s) you can move, remember that everyone’s SAG Pension Credits are based on earnings in a calendar year – NOT the same as your Health Base Earnings Period unless that is a calendar year as well.  If you want to move money from one Base Earnings Period to another to be eligible for health coverage, you may end up dropping below the pension credit minimum and thereby lose a pension credit.  Then you would have to calculate what you may be giving up in pension in order to get health coverage.  It may be worth it.

In case you were not aware of this, if you do not earn enough to get a Pension Credit ($20,000 for 2012), none of the money you earned in SAG that calendar year gets deposited in your pension.  Dems da breaks.  SAG P&H said you cannot move earnings to get a Pension Credit.  Call the SAG Pension & Health Eligibility Department if you have any questions about any of this.

Extra Special Money Tip – just between you and me:  Now that you know your Health Base Earnings Period and keep an eye your Pension Credits, there is something else you should keep in your brain.  When you work, the date the check is cut is when the payroll company reports your earnings to SAG.

You may work near the end of your Base Earnings Period and need that money to be credited on the work date.  Usually, your check gets cut weeks later.  If the check is cut after your new Base Earnings Period starts, you will probably have to follow up with SAG Pension & Health to make sure it is accounted for properly to the previous period.

Also, if you have already qualified for health coverage for the next year, and it’s a month before the start of your next Base Earnings Period, and you book a job, ask the producer not to pay you for a month.  I did that once and the guy happily agreed saying, “I don’t usually get calls from actors asking me to not pay them.”  Another time, a producer said yes then called my agent to badmouth me for asking, and told him no.  That person yelled at my agent, “If he wants health insurance, he should work at a grocery store!”

Your trusty Herald Square #2 pencil is busted and your smartphone’s battery has died.  You need to find out approximately how long it will take for an investment to double